How to Create a Cryptocurrency from Scratch and Start an ICO?

Home/Products/How to Create a Cryptocurrency from Scratch and Start an ICO?

How to Create a Cryptocurrency from Scratch and Start an ICO? Recently, the spotlight has shifted to the cryptocurrency market, blockchain technology, and initial coin offerings (ICOs). Bitcoin’s emergence signifies a drastic shift from the centralized financial community governed by bureaucrats… toward simplicity, anonymity, accessibility, freedom, and inexpensive transaction costs. This new and exciting world allows you to do things like creating your cryptocurrency and launching an initial coin offering (ICO).

Can any company utilize an ICO?

An ICO is appropriate for people in business, enthusiasts, ideologists, and organizations that feel that their initiative has the potential to impact, if not the whole globe, then, at minimum, a certain nation. It’s perfectly acceptable for online and offline endeavors.

What is the process of an ICO?

There is a common misconception that an ICO is the same as an initial public offering. Initially, this financing strategy is ideologically closer to crowdfunding efforts like Kickstarter and eventually to the IPO process.

Thus, the ICO procedure may be broken down into several distinct steps. There are smart contracts in the blockchain at the heart of it. Whether you use NXT, Ethereum, or any other blockchain makes no difference.

Therefore, smart contracts serve as the primary building block, central mechanism, and bedrock of the whole ICO. Before we go too far, the first stage is to develop your cryptocurrency or token, which is then continued by the pre-ICO and ICO phases.

How to Get Started with Your ICO 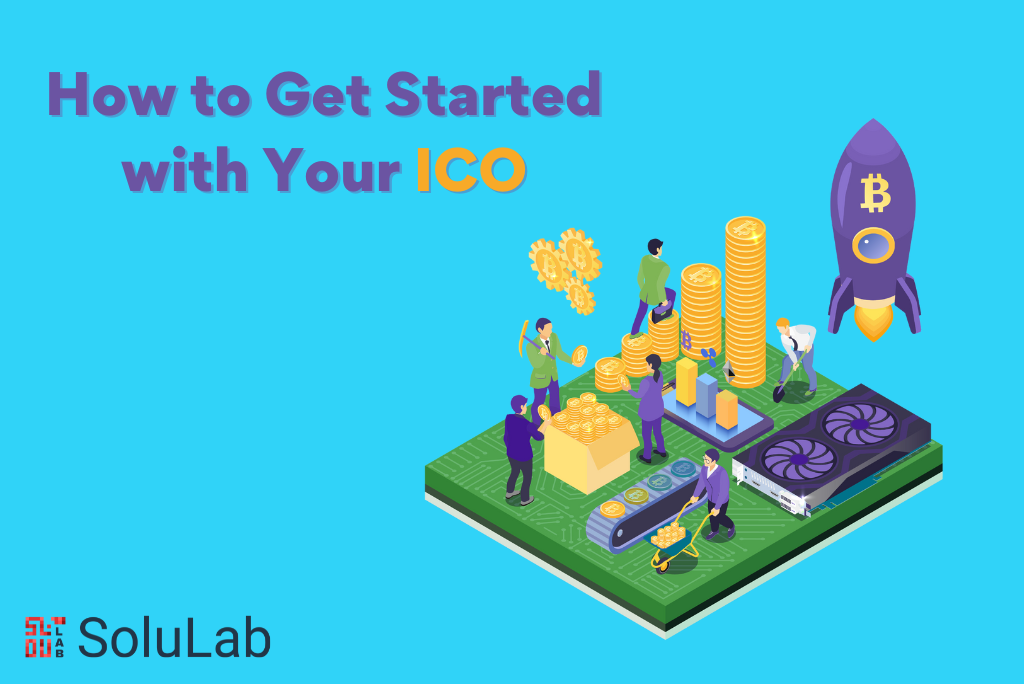 After settling on a concept and investigating the market, you’re prepared to take the first proactive actions toward the new token launch. At this point, you may depend only on yourself and your team.

Having a project team that can inspire trust in the minds of potential backers is just as important as having the knowledge and experience to pull off a successful initial coin offering (ICO).

The advisors play a pivotal role on the team and considerably impact the project. Finding competent advisors, who serve in the same capacity as a mentor, is not hard to do. They will either support or overlook your initiative until you show them meaningful results.

The function of your ICO’s advisers is to pave the way forward in a realistic manner. Your path will be simplified if they have prior expertise in your project field.

Advisor relationships seldom result in monetary compensation. Typically, you give them a stake in your coin launch initiative. You should include them prominently on your landing page. You may use their knowledge to your advantage.

One of the most powerful and useful features of your ICO. The white paper describes your idea and ICO technically and operationally. You may read about the team’s history and the members’ personal backgrounds there. Education and appropriate work experience should be given special consideration.

The white paper offers a plan of action. This should be mentioned on the homepage as well as in the text. Plan out the first six months to a year in great detail and put it on the road map. Quarterly roadmap reviews should be enough to plan well for the long term. Go ahead and include prior accomplishments and milestones in your chronology if possible.

A white paper piques the curiosity of many investors, cryptocurrency enthusiasts, and influencers. You risk damaging your initial coin offering (ICO) and brand if its documentation is of poor quality.

The length of the white paper shouldn’t exceed 100 pages at the most. If you aim for 5-10 pages, you may find it challenging to provide sufficient detail on your accomplishments, ideas, objectives, and the market. Focus on accuracy and adapt your strategy to the specifics of the project.

Investors will invest significant time and effort into learning about your firm and analyzing your ICO plans. Investors are apprehensive since the market has experienced several scams and frauds in the past.

Almost wherever you listen to or attend a podcast, conference, or event, the presenters will stress the need to do thorough ICO thorough research. Other aspects will also be evaluated, such as social appeal, the white paper, team engagement, project quality, and preparedness.

However, even if you are not breaching any laws, any suspicious action on your side, particularly in investment management, can lead to your project being dubbed fraud by the cryptocurrency industry. Your initial coin offering (ICO) will inevitably fail if such occurs.

Consequently, you must not only be law-abiding while dealing with other people’s money, but you must also be entirely open and honest about the process. The project’s financial details must be meticulously planned out, including taxes, fiat withdrawals, expenditures, and so on.

There has to be a good balance between reliability, professionalism, and friendliness in the design of your website, and it should convey the character of your launch coin project. One might lose many potential backers over something as little as improper text layout. You should consider getting expert help with your website’s development and design.

Having a website that is unavailable at any moment is something you certainly don’t want. If your ICO has garnered enough attention from the public, it will launch to a sudden influx of thousands of visitors. You need to get a solid hosting provider if you don’t want your website to fall at a bad time.

The first step in a successful token launch is a well-thought-out distribution strategy. The needs and goals of a certain ICO determine this to a large extent. In this regard, the token sale might have many phases, such as the pre-sale, the ICO itself, a private sale, and a public sale.

The market for an ICO launch platform that can be used to distribute tokens for ICOs is mostly uncontested. Most of these initiatives are using Ethereum or creating their blockchain infrastructure.

It’s not hard to generate a token, particularly an ERC20 token built on Ethereum’s platform. The necessary code is provided on Ethereum’s website.

Nevertheless, if you aren’t tech-savvy, you may want to hire an expert to help you customize the crowd sale logic for your tokens.

So you’ve got everything covered. Your ICO campaign complies with all local, state, and federal laws and regulations since you conceived a concept, assembled a hard-working team, wrote a white paper, designed a coin, and followed all relevant procedures. It’s time to start advertising it now. If you don’t do this, you’ll never make any money.

The promotion has to happen before the introduction of the cryptocurrency, during the public sale, and after that. Both internal and external advertising are considered part of marketing in this context. Working for the brand is mandatory.

Important activities include lead development, investor interactions, and marketing to prospective team members and advisers. You should place a higher priority on attracting investors than customers.

Organizing and carrying out an ICO might take a significant amount of time. However, if done correctly, the benefits may be enormous. They will guarantee that you produce sufficient capital for your firm to carry out whatever project requires the ICO to be carried out.