There are plenty of options when you want to choose a programming language for website development. But, you must be cautious before selecting this if you are a startup and are developing a website for your company for the first time. Popular tech giants like Walmart and Goodreads have opted for Ruby on Rails and they are flourishing even now. Yet, one must consider aspects like cost, expertise level of the team and availability of libraries. In fact, Ruby on Rails for startups is the best choice for web development. So, let’s know the top reasons to choose Ruby on Rails, before going into specific details about its various benefits for startup web development companies.

Well, what is Ruby on Rails? It is a cross-platform web development application written in Ruby under the MIT(Massachusetts Institute of Technology) License. Moreover, it is a programming language with an integration like other languages like Perl and Python. It is an open-source web development framework based on the MVC (Model View Controller) pattern. Besides, it is a hot option among web developers today.

According to Similar Tech, the recent data shows that almost 3,39,785 websites use Ruby on Rails whereas 1,22,307 websites use its competitor Python.

Also, the leading website category that uses Ruby on Rails is Business and Industry (19.43%), followed by Arts and Entertainment (7.17%) and Shopping(15.5%).

From Walmart to Github, developers are really fans of Ruby on Rails.

However, the difference in business categories these websites operate on is huge. Let’s take a closer look at the massive differences they have. 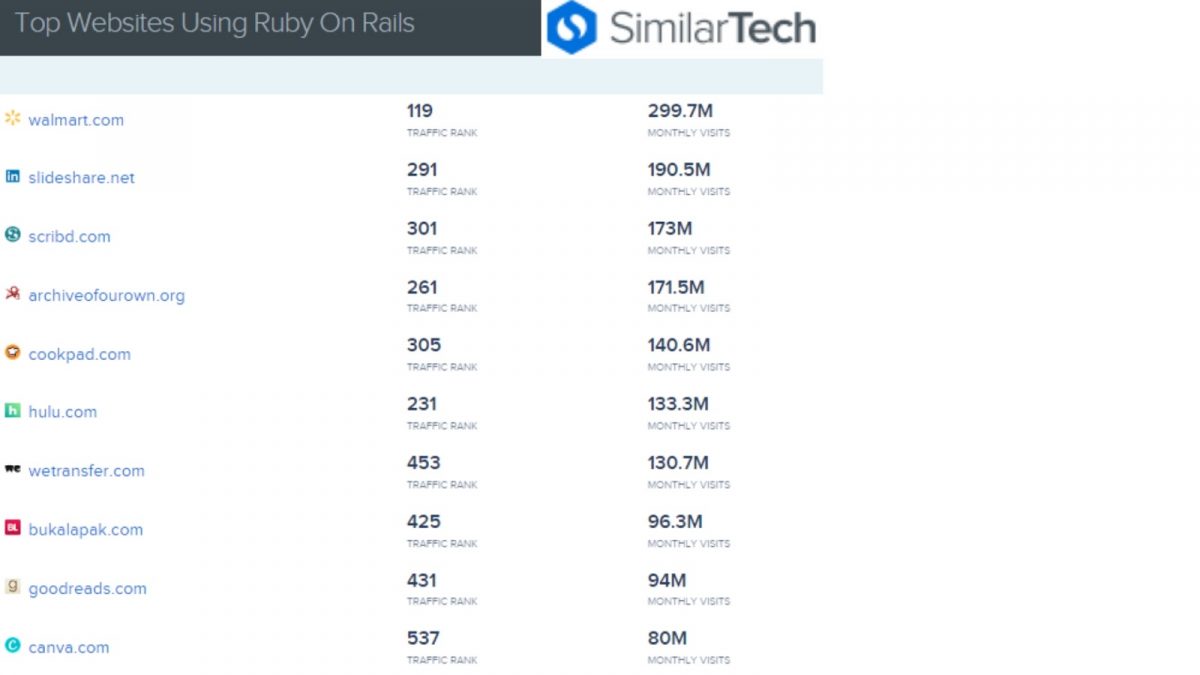 It is clear that Ruby on Rails covers all modern business domains. With its various benefits, it is definitely the first choice of all web developers. Why so? Let’s know more about the top reasons to choose Ruby on Rails for startup web development.

Why choose Ruby On Rails for startup web development projects?

Be it, Python, PHP or ASP.Net, Ruby on Rails has always been more trending than other among web developers. Due to its unlimited benefits, Ruby on Rails is a popular choice for developers worldwide. Well, let’s take a detailed look at the top reasons to use RoR for startup web development projects.

Apart from being an open-source framework programming language, Ruby On Rails is also available free of cost. So, even if one has a tight budget, opting for RoR won’t be a bad idea. Companies can use their framework to build great web applications. In fact, most of the startups and new business ventures aren’t financially strong and RoR is the best choice for them.

Besides, the license fees of common languages are quite expensive for startups. However, RoR doesn’t have that problem as it is accessible under the MIT license. This is a free software license introduced by the Massachusetts Institute of Technology (MIT). Also, the opportunities for maintaining a robust database or building a chat application, increase very much. In other words, RoR is an e-commerce friendly platform too that attracts more startups.

What is the biggest factor that makes RoR a hot option for startups? Well, it’s the easy teachings of Ruby On Rails for startup web development. The simple English-like syntax makes it easy to read, comprehend and write programs in RoR. Not only does it use a simple language like English but also its own domain-specific language. Though domain-specific languages are difficult to handle, ROR strikes a good balance. Thus, it makes a programming language less complicated. Besides, developers can actually save a lot of time as they would not have to rewrite or create code from the beginning.

Do you know that RoR reduces the development time almost by 25-50% when compared to other languages? Moreover, a rich source of third-party libraries like Rails makes Ruby an eloquent language. It helps developers to build website features incredibly fast.

In fact, RoR is one of the most productive programming languages designed in such a way that it gives priority to convention rather than configuration. Let’s take a look at some of its benefits of RoR for web development.

The Ruby on Rails is preferred for startup web development. This is because it is a saviour when you need to be ready for any code changes in future even though you have built the best web application. Besides, you may also sometimes want to add new functionalities or fix errors. RoR is the best in this case because of its clean codes.

In many programming languages like PHP and JavaScript, a developer might have to start from scratch to fix any issues with a web application. This can actually cost a lot. However, the RoR is an exceptional case.  Here, moving of the code conventions from one developer to another becomes easier. Further, the code is simple to understand, simple and clear too. Even a new developer can use it with ease without having to start everything from the start again.

Ruby On Rails has effective solutions with a combination of robust infrastructure and beneficial communities. This has even inspired the RoR development community and community hosting services like RubyGems, are helping in hosting solutions. Besides, the easy to maintain framework with ample support from the large community of talented web developers makes RoR the best. It is highly productive and helps developers to build faster web applications too. Thus, these have made RoR the best-supported web development frameworks for startup web development.

Altogether, there are many reasons why Ruby on Rails is the best web development framework for startups. Ruby on Rails for startups is definitely the best option due to its cost benefits and ease of use. Besides, the clean and clear coding with high productivity makes it one of the most popular web technologies. So, which language will you choose for your website? Will it be Ruby on Rails or any other language?

P.S.: We are proud to announce that we have been featured as Top 25 Software Development Company on SoftwareDevelopmentCompany.co