With the advent of technology, there is a vast spread in the use of Internet of Things (IoT) in various segments such as energy, cities, logistics, homes, industries, health, and agriculture. According to Gartner, there will be 26 billion devices using this technology by 2020. IoT is a technology that involves connecting physical things to the Internet thus, enabling them to communicate and transfer data over the Internet. Introduction of IoT has made the grid smarter, reliable, efficient and robust. Several architectures are available for IoT implementation in smart grid (SG). Basic three-layered architecture is shown in figure1.

The smart grid can be divided into four phases: power generation, power transmission, power distribution and consumer consumption. Role of IoT in all the four elements has been discussed below.

In the past few years, countries across the globe have realised the immediate need for setting up renewable energy systems such as solar and wind energy systems. In the case of solar energy, a large amount of area receiving proper sunlight throughout the year is chosen and PV cells are installed thus, making a solar farm. Recently, India has unveiled the world’s largest solar farm, Pavagada solar park with a capacity of 2GW. Also, the government of India has been promoting the installation of PV panels on rooftops of buildings to fulfil ever-increasing energy needs.

Similarly, a large number of wind turbines are installed in areas where wind velocity is relatively high. However, solar and wind power is intermittent in nature and depends highly on weather conditions and location. Therefore, it causes challenges for reliability and predictability of power supply. Here, IoT based systems use sensors such as temperature, humidity and wind speed to collect weather information in real-time and store the sensor data. The data helps in weather forecasting and hence, helps in forecasting energy availability in future.

IoT technology helps the end-user to keep a check on electrical parameters like current and voltage. Current and voltage sensors are installed on the PV panel output, DC boost converter output and battery. It is then connected to a control unit. The control unit receives the sensor data and pushes it to a cloud database for storage.

The data is remotely monitored in real-time by the end-user on an app or web interface as shown in figure 2. Here, net metering can be realised more efficiently since the user can make an informed decision about selling stored solar energy back to the grid.  Similarly, IoT based real-time remote monitoring and control systems find uses in the wind, hydroelectric and thermal power plants to monitor the health of machinery, electrical parameters and control equipment over the internet. Traditionally, the monitoring of transmission systems was performed manually. Periodic visits were conducted to check the equipment status. Unlike generation and distribution systems, the transmission system is widely spread over a huge area. This poses a great challenge for manual patrolling as towers and lines are located in remote areas. IoT based online monitoring system for transmission towers provides a more robust and reliable means. The tower faces damages due to many factors such as cyclone, thunderstorm, earthquake, illegal construction and theft which might lead to the collapse of the tower. Tilt, vibration, weather sensors and cameras installed on towers can transfer accurate status of tower data to the officials.

The online monitoring of transmission lines facilitates early detection of faults and their resolution. Conductor temperature and wind effect can be monitored to keep a check on the line performance and status. Also, IoT based monitoring of electrical parameters at each tower using power analyser will enable the officials to identify if there’s a greater than expected loss of energy. Greater loss of energy may imply theft of electricity and hence the officials can act accordingly.

The authorities can distribute power more efficiently in this IoT aided the smart grid era. Smart energy meters send the consumption data to the cloud. Hence, the authorities have complete information regarding the load consumption in each location and at each instant of time. They can reorganise their scheduling plans based on load requirement and make the distribution efficient and optimised. This will improve reliability and cost-effectiveness.

Also, there is a lot of human effort required in physically going and keeping a check on generation, transmission or distribution machinery. This human labour is reduced with the application of IoT devices and systems. The online monitoring helps in identifying the equipment requiring attention and its location. This helps the authorities in state maintenance, staff positioning for patrolling, equipment status reports and weather monitoring.

With the help of IoT, the system can identify faults immediately and take suitable action. A smart distribution grid may have a temperature, humidity, noise sensors for monitoring of distribution grid. Tower tilt sensors are also used to notify the authorities about tilt status of towers and to take action for maintenance if it has reached a certain tilt angle. The power from the distribution centre is distributed to consumers, both residential and industrial. Role of IoT in making the consumer consumption intelligent is discussed.

IoT plays a major role in the modern home and building automation systems. The system consists of:

There are multiple elevators in a building. It is difficult to know the status of each elevator at the same time. The control unit of the elevator can be connected to the internet and hence enable the end-user to check the status of all the lifts in a building on a web or app interface in real-time.

Gas and smoke sensors are used to detect fire and raise an alarm. The internet-connected control unit can automatically notify the nearest firefighter unit via automated mail or message over the internet in case sensors cross a specified threshold value. IoT based surveillance systems are used for real-time remote monitoring of home or building.

Traditionally, it required human effort to read power consumption at specific intervals from energy meters at consumer premises. It has disadvantages such as additional cost of meter reader, prone to human error and safety issues due to meters being installed inside consumer’s premises. Smart Energy meters are an essential element of the Smart Grid (SG). They send the power consumption data to the cloud. Both the authorities as well as the user can keep a check of the power consumed in real-time via a web or mobile app interface. The user can also perform analytics to predict the monthly bill based on his usage data. This IoT based Advanced Monitoring Infrastructure (AMI) is more reliable, robust, efficient and cost-effective. A block diagram depicting the smart home and smart energy meter are shown in figure 3.

Electric Vehicles (EVs) are gaining popularity and in the near future, the number of Electric Vehicles on road will increase in India. The EVs use battery systems to store energy and research is being carried out to implement a Vehicle to Grid (V2G) system as it’ll provide more stability and robustness during peak loads and failures. As per the need, the EV user can charge a battery (Grid to Vehicle, G2V) or can sell stored energy back to the grid (V2G). Using IoT, measured Battery State of Charge (SOC) is sent to the cloud and it enables users to remotely monitor SOC in real-time with the help of a web or app interface. Thus, IoT integration helps the user in real-time monitoring and it’ll help the user to make an informed decision to either charge the battery or send energy to the grid (G2V and V2G).

IoT based systems are a key feature in modern-day smart cities. A smart city may have the following systems: 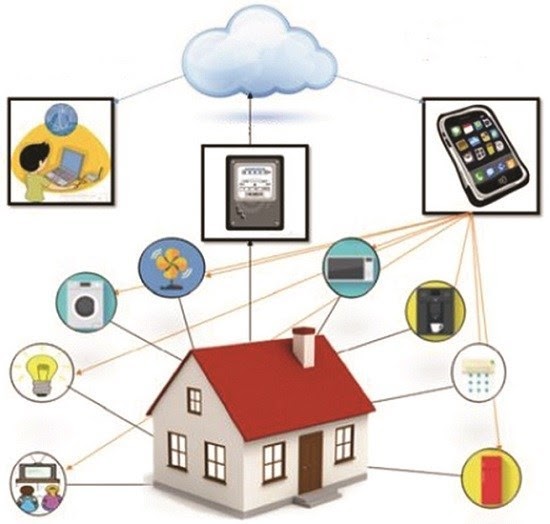 IoT has proved to be a revolutionary technology and has brought immense scope and opportunities for innovation in every sector. With the energy sector pushing its focus towards renewable energy and electric vehicles around the corner there is ed for utilities to invest in innovation which brings reliability, robustness and cost-effectiveness to the existing grid elements. We can achieve real-time remote monitoring and gather information through sensors. The dataset can be analysed by using machine learning algorithms to optimise scheduling, studying and predicting load patterns and increasing efficiency. The demand for energy has been on a rise consistently in India and implementation of IoT in the t grid will definitely benefit the utilities.

About the Author: Rishav Bagga