From Farm To Plate – How Blockchain Technology Can Reinvent Agriculture Sector?

From Farm To Plate – How Blockchain Technology Can Reinvent Agriculture Sector?

The tumultuous rise of bitcoin rates helped popularize the concept of blockchain, the technology behind cryptocurrency. Though the Bitcoin value didn’t sustain, blockchain has opened up a plethora of technological possibilities that has enticed investors and tech geeks worldwide. Blockchain is basically a digital ledger that can record transactions of any kind. Not just financial transactions, anything of value can be programmed into the blockchain ledger. Its incorruptible nature owing to a distributed and dynamic database makes it an attractive option for many industries, including the agricultural sector.

Within the modern agricultural sector, tracing the trajectory of food products as they reach our tables from farms, is an important avenue. False labeling, food fraud and food contamination cause around 420,000 deaths annually according to a WHO report. Blockchain can play an aggressive role in addressing this serious health issue. Using blockchain one can make sure whether a certified organic or fair trade product actually lives up to its claims. Currently, a centralized record keeping system is used in most places that is prone to tampering. In a blockchain based system, the records remain secure eliminating the need for a third party presence. The immutable records can then be updated in real time allowing farmers to better manage their crops. Ultimately, the goal is to provide the customer with a transparent record of the farm to table track of food products. The customer will be appreciative of paying a premium price for such products if he or she is assured of its origin. 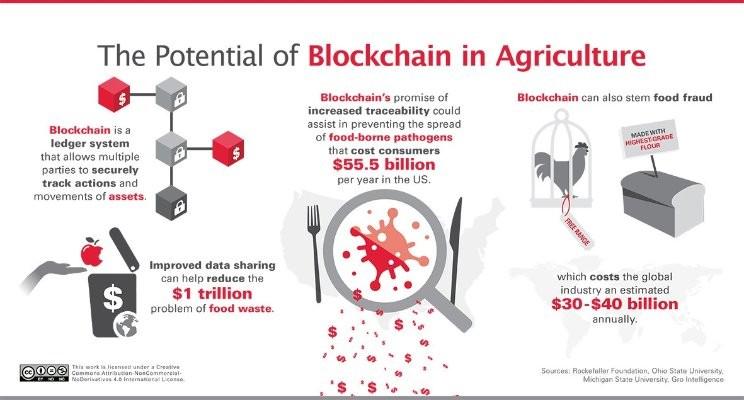 A cooperative called Grassroots in Arkansas has already used blockchain to create an interactive interface. This interface allows the farmers and other partners in the supply chain process to chart the path of poultry. Agridigital, another startup in Australia has utilized blockchain in a similar manner to manage grains as they move through the value chain.

Along with the ability to track the route of a product, blockchain also helps eliminate rudimentary elements from the process. In the event of a food safety crisis, it can recognize the source without much ado. Eventually, this could save time, money and lives. 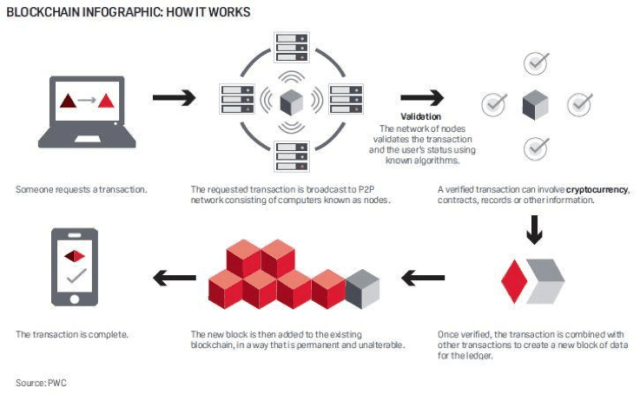 Blockchain gained popularity for the financial leverage it provides with transparent transactions. Several organizations have worked at inculcating this benefit into the agricultural cycle. Most current models are primitive in nature and profess the use of several middlemen who eat into the farmer’s income. Payment is erratic and based on unpredictable statistics such as weather, sales, and demand. The rates fluctuate on a daily basis due to which the impoverished farmers languish at the mercy of volatile factors. Introducing blockchain into this ecosystem can help revamp the entire payments process. Blockchain eliminates the traditional need for middlemen and enhances financial security. The promised payments can take place instantly and in a transparent manner. Weather data and online records can be used to study price and demand fluctuation. These statistics can, in turn, help the farmer plant his harvest.

An Amsterdam based technological solutions company, Coin22, has developed the Agriwallet. It is a blockchain based payments solution that connects the entire supply chain from Europe to Kenya. 4000 farmers currently benefit from the simple UI of the app which uses the already popular MPesa mobile money platform. The model is easily scalable across borders. Coin22 hopes to rope in over a 100,000 farmers across the African subcontinent by 2019.

The parent company of Agrics, ICS, is exploring a savings platform based on blockchain. Using the Agriwallet, the end product will enable the farmers to buy ‘drought coins’. These virtual coins can be cashed at the end of the season according to weather conditions and satellite data.

Bext360 is another startup that aims to revolutionize the coffee supply chain. It uses artificial intelligence and advanced machine learning for analysis. The product is analyzed and priced at rhe source itself. The payment is instantly transferred via a blockchain enabled smart contract.

Most if these startups work in impoverished nations such as Uganda Kenya, Ethiopia, Nicaragua and Columbia. The farmers in these countries have rarely been of the receiving end of technological benefit as they continue to toil and suffer. But the transparent and easy ecosystem of blockchain technology has enabled them to reach out to the rest of the world. They now have access to wider markets, easy payments and a better life.

Blockchain in agriculture is still in its nascent stage undergoing dynamic changes. According to a Stanford University study, only 7% of all blockchain based social initiatives focus on agriculture. 93% of these agricultural startups are either in the concept stage or pilot stage. The impact of blockchain remains largely unproven and immature. But the potential of this technology continues to invite interest from investors and entrepreneurs. Hopefully, by he end of 2020, the agricultural sector will have grown to accept the technological marvel that blockchain is.